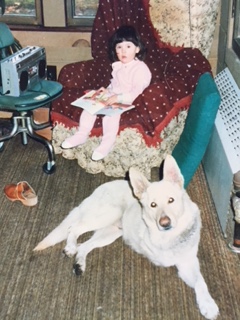 I was raised in the woods by wolves, while my mother, the Martyr, was at work and my father, the Madman hid in plain sight. Well, really it was just one old white wolf with only three legs, named Gus. He was my fierce and silent protector. A stand in for my father who couldn’t really be there. Gus followed me obediently as I tottered around, and I felt safe to go anywhere. He only ever woofed in warning right before I was about to fall or right before he was about to pounce.

We were often accompanied by our kitty cat, Cinder. She lost half her tail one day when she escaped a demon from another realm and emerged from the darkness into our world. We all instantly became inseparable, a tight knit pack, a family unit. Unbeknownst to me and Gus, Cinder carried five tiny lives within hers as she merged with ours. But we weren’t really surprised. She was the quintessential mother, a survivor, willing to do anything for her sons and daughters, but always dignified.

We made our own world in the gully between the house and the highway. It was complete with stone walls and long forgotten waterfalls, with bridges made of fallen logs and castles made from abandoned cars. I brought my baby sister down there to save her from the screaming, hoping that she would find peace within the safety net of leaves and trees. Other children joined us at times.

We were busy, building our reality, calling it into being with our stories. Everything was really important! We were saving the world! First taking care of the new born kittens. And then rescuing baby birds and chipmunks from the jaws of those pesky little cats as they grew bigger. We nursed them back to health and tried to keep them as pets as well. But it never lasted long. As soon as they were better, they were gone, back out into the world. They belonged to themselves.

Just like each of us, me, Cinder and Gus, all still 1/2 feral. Fierce and silent until ready to strike. Capable of defeating demons from other dimensions. Always kind of alone, even when caring for others.

I am a yoga teacher and a mother. I am a warrior and a dreamer. I seek and create beauty in this crazy world, always looking for the lessons and the magic that will move us forward as individuals in relationships and communities. View all posts by outcreatethematrix